The Guadalupe-Coyote Resource Conservation District (GCRCD) is an independent special district of the state of California dedicated to the conservation of natural resources in Santa Clara County. The District is regulated by Division 9 of the California Public Resources Code (PRC). The Legislature declared resource conservation districts to be legal subdivisions of the state, and for the purpose of contracting with state agencies only, resource conservation districts are considered agencies of the state. The primary purpose of California’s RCDs under Section 9001 (a) of the PRC is to secure "the adoption of conservation practices, including but not limited to, farm, range, open space, urban development, wildlife, recreation, watershed, water quality and woodlands."

California's Resource Conservation Districts are leaders in locally-led conservation work throughout the State. The GCRCD is governed by a volunteer Board of Directors. RCDs implement on-the-ground projects, provide technical assistance, and help educate the public to improve their local communities. RCDs rely on volunteers, such as Associate Directors, to accomplish their mission. Associates provide value to Districts by providing additional expertise to the Board, including but not limited to the areas of: natural resources conservation and management; agricultural and grazing management practices; environmental health; land use; engineering; physical and life sciences; public outreach and education; and local government policy and procedures.

Resource Conservation Districts (RCD's) were first known as Soil Conservation Districts and were originally authorized by Federal Legislation in 1937 under the Standards Act. They were initially formed in the Midwest to deal with the unparalleled ecologic disaster known as the Dust Bowl and were created to serve as the local liaisons between the US Soil Conservation Service, now known as the USDA Natural Resource Conservation Service and local landowners. They were immediately recognized as serving a very important purpose and thus rapidly spread to other states throughout the country.

California quickly adopted State provisions authorizing the formation of Soil Conservation Districts in 1938 and these are expressed in PRC Sections 9001 et. seq. These provisions have been amended through the years to reflect the changing needs of all those affected as well as the changing environmental conditions.

As stated above, as of 1992, the primary purpose of RCD's under Section 9001 (a) of the PRC is to secure "the adoption of conservation practices, including but not limited to, farm, range, open space, urban development, wildlife, recreation, watershed, water quality and woodlands."  In addition, RCD's are tasked with saving the basic resources (soil, water and air) of the State from unreasonable and economically preventable waste and destruction.

Under PRC Section 9001 (b-1), the District has the legal authority to cooperate with the United States, the State of California, counties, cities, public districts, other resource conservation districts, persons, associations and corporations.  Additionally, PRC Section 9001 (b-2) authorizes RCD's to construct on private or publicly owned lands, with the consent of the owner, "necessary works for the prevention and control of soil erosion and erosion stabilization." The California Legislature determined that the construction and maintenance of conservation projects on publicly or privately owned lands in or adjacent to District lands is in the public interest and for the general public benefit. And, the expenditure of state, county, city district or other public funds for planning, designing or implementing conservation works constitutes expenditure for the general public benefit.

The Black Mountain Soil Conservation District was organized in 1943 to cover some 5,500 acres of land in the Calabazas Watershed on the west side of Santa Clara Valley.  It later expanded to cover most of the hilly land on the west side of the valley from the San Mateo County line to Loma Prieta Mountain and the boundary of the Loma Prieta Soil Conservation District.  Most urban lands at the time, as well as the lands of Stanford University were excluded from the District. 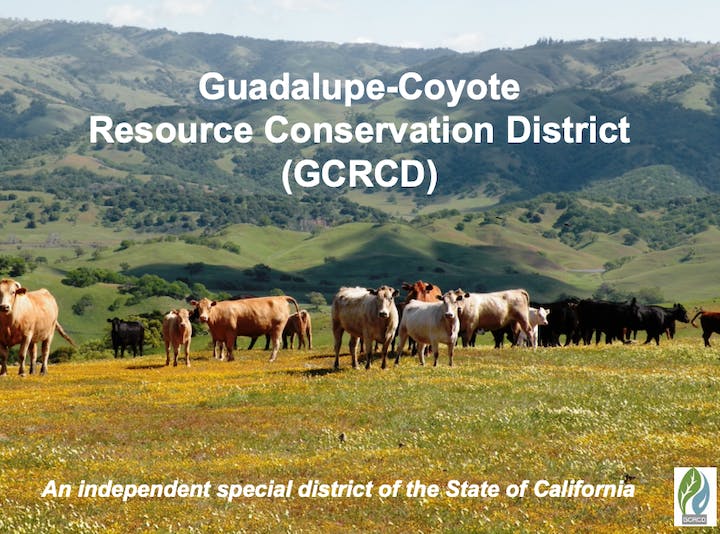 GCRCD is an independent special district of the State of California. Its authorities are contained with Divsion 9 of the Public Resources (PRC) Code.