Great diversities of climate, vegetation, topography, geology, soils, population density and land use lie within the area.  The district, for ease of description, may be divided into three sections: The Santa Cruz Mountains on the southwest, the Santa Clara Valley in the center and the Diablo Mountain Range to the northeast.

The District area encompasses at least a portion of ten distinct watersheds that drain to the lower portion of San Francisco Bay.  Seven of these watersheds drain the northeast and east facing slopes and one drains the north facing slopes of the Santa Cruz Mountains.  Two drain the west facing slopes of the Diablo Range.  Many of these watersheds once supported large runs of salmon and steelhead trout.  Due to severe human impacts to over the years only token salmonid runs exist today and unless the trend is reversed these fish could very well become extinct in our waters in the not too distant future.

Vegetation is dense on the westerly side and less dense towards the Santa Clara Valley floor as precipitation diminishes.  Redwood, Douglas fir, madrone, laurel, turnbark oak, black oak, live oak and bigleaf maple are the principal tree species with some areas of dense brush composed of ceanothus, chamise, manzanita, and poison oak.  Southeast of Los Gatos Creek, redwood and Douglas fir are usually absent and knobcone pine appears in some isolated areas.  Bush species are more wide spread to the southeast of Los Gatos Creek.  The more gentle slopes, usually ridge tops, were cleared and planted with fruit trees in the late 1800's and early 1900's.  Apple and pear orchards were most prevalent, as were vineyards.  Several areas, particularly near the Los Gatos-Santa Cruz Highway, were developed in the 1920's as summer home sites.  On the lower slopes, next to the Santa Clara Valley floor, prune, apricot and some almond orchards were planted on the cleared land in the late 1800's and early 1900's.  These plantings on the lower slopes were abandoned toward the middle part of the 1900's.  In recent years the summer home areas have been taken over as permanent housing and construction of new homes has proliferated, not only in the foothill areas, but also at higher elevations.

San Francisquito Creek, Matadero/Barron Creeks, Adobe Creek, Permanente Creek, Stevens Creek, Calabazas Creek and San Tomas Aquino/Saratoga Creek watersheds drain the northeast and east facing slopes of the Santa Cruz Mountains, originating on the east side of Skyline Boulevard (State Highway 35).  Each of these creeks flow across the western portion of Santa Clara Valley to the Baylands bordering the west and southwest sides of San Francisco Bay.  The Guadalupe River watershed drains the north facing slopes of the Santa Cruz Mountains at the southern end of the Santa Clara Valley.  The Guadalupe River flows north through the valley and into the south end of San Francisco Bay via Alviso Slough.  It is the second largest watershed in the Santa Clara Basin.

The Santa Clara Valley lying between the Santa Cruz Mountains on the southwest and the Diablo Range on the northeast has a climate greatly modified by San Francisco Bay.  Precipitation varies from 12 inches at the middle of the widest portion of the valley in the northwest to 16 inches at the base of the Diablo Ranges.  Approximately 18 inches of rain falls on the extreme southeast edge of the District and 21 inches along the southwesterly edge of the valley.

In the 19th century, the valley floor was mostly used for grain production.  The advent of irrigation introduced orchard planting, resulting in the most concentrated prune, apricot, cherry, and pear growing areas in the world with lesser orchards of walnuts, almonds, peaches, and apples.  Grain production almost disappeared as much of the land that failed to be turned into orchards was used for vegetable production.  Some small areas with poor drainage were used for dairies.  After World War II, the incoming population rapidly increased, creating an ever-increasing demand for housing, replacing the orchards with homes.  Returns on orchards began to decrease in relation to vegetable returns resulting in a further demise of the orchards.  At the present time, most of the valley is comprised of housing, businesses or industry with a few small orchards and a little bare land remaining in the northwest portion of the county.  Some vegetable production still continues in the narrow southeastern portion of the valley above Coyote Creek.  Vegetables are still grown in limited areas west of Milpitas.

Precipitation over the Diablo Range varies from 20 to 30 inches with greater amounts over the higher elevations.  Summer daytime temperatures at lower elevations (2,000 ft.) are high in the eastern portion of the area, while wintertime minimum temperatures are lower than in the Santa Clara Valley or Santa Cruz Mountain areas.   Calaveras, Hayward, Silver Creek and lesser faults, mostly parallel to one another, are located in the western portions of the Diablo Range.  Faults in the eastern portions are not as numerous as in the western section.  Ancient landslides are abundant on the slopes facing the Santa Clara Valley and slides continue to this day.

Grasslands or woodland areas prevail over most of the western portion of the range and brush is prevalent over much of the eastern portions.  Both brush and woodland are denser over the northeastern slopes.  At higher elevations (Mt. Hamilton at 4213 ft. is the highest peak) coulter pine, ponderosa pine and black oak form light stands with digger pine and blue oak comprising the main tree species elsewhere.  Scattered juniper is found in the eastern areas.  Brush clearing, particulary in the more eastern portions of the Diablo range, has been common to improve the pastureland for grazing.  Large cattle ranches are common in this section, except for the slopes near the valley floor on the southwest.  Prune and apricot orchards were established in the late 1800's and early 1900's on the slopes adjacent to the Santa Clara Valley.  These orchards were abandoned much more slowly than their counterparts on the southwestern side of valley and a few still remain.  The west-facing slopes of the Diablo Range in the southern and southeastern portions of the Basin are drained primarily by Coyote Creek.  The Coyote Creek watershed is the largest in the Santa Clara basin.  Coyote Creek flows the length of the valley from south to north at the base of the Diablo Rnage before entering the southeast side of San Francisco Bay.  The Lower Penitencia Creek watershed drains the foothills of the Diablo Range in the northeastern portion of the Basin. 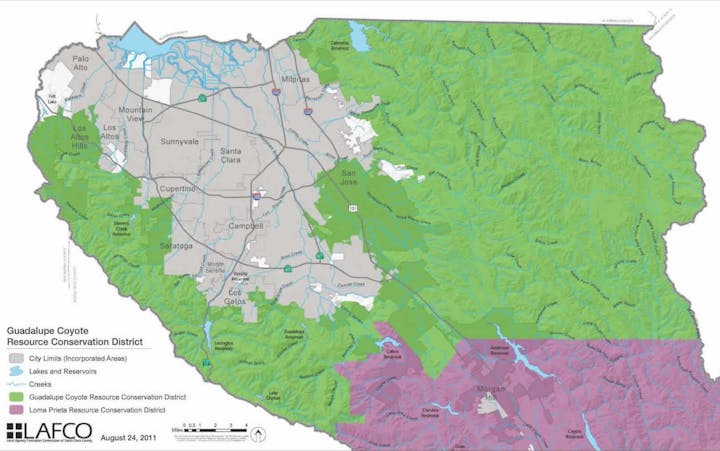