Roger Castillo is a citizen naturalist who grew up in the San Jose area and has walked along portions of local rivers and creeks for over 30 years. As a "river guardian", he observed and recorded the changes in the Guadalupe and other local river systems that flow to the San Francisco Bay estuaries. Roger is known as the discoverer of the remains of "Lupe" - a young Columbian Mammoth - that lived approximately 60,000 years ago – while he and his dog Jenna were on a nature walk along the Guadalupe River. He was a long-time President and Director for the District, and continues to work passionately on environmental and wildlife issues in the San Jose region. He now works part-time monitoring local watershed conditions for the District, 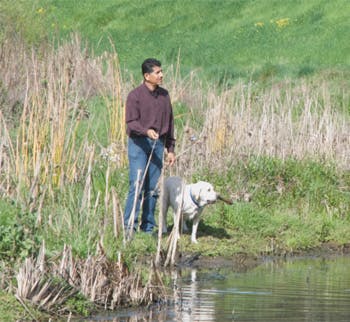 In 2005, long-time GCRCD Board member and citizen scientist Roger Castillo and his dog Jenna found a bone from a Columbian mammoth while walking along the Guadalupe River.  Ten years later, the find has been commemorated with a beautiful (and enormous!) sculpture.